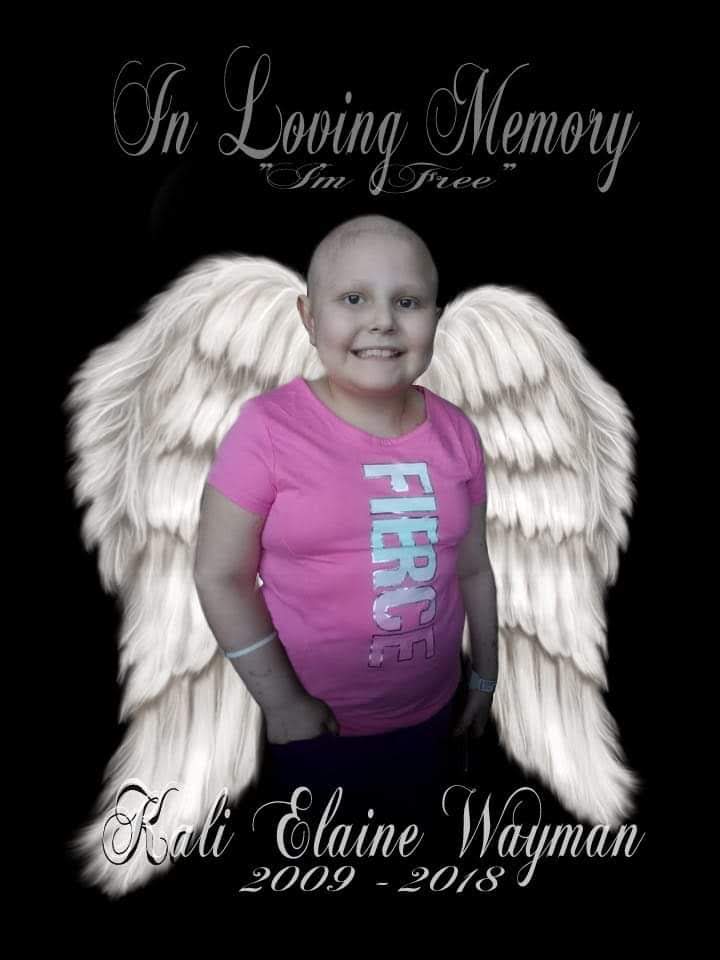 The last day that me and her dad saw her at the hospital and she sang us that song about “I have a dad, a special dad, and then I have a mom, a caring mom and so forth” it was about us. That day we had to go to get a new phone because her dad’s phone broke and we were secretively getting Kali her own phone. It was an early Xmas present as this was November 27th.

Normally Kali wants her dad and I to stay with her and hates an hated when we left: she would cry and throw a fit, she would call and call and call us asking when we were coming back. She never wanted to be away from her dad mostly she was a daddy’s girl. That day we told her we had to run some errands and would be back. We were waiting for Kali to throw a fit and cry and make a scene but she didn’t: she said “ok but you guys are coming back right?? And spending the night to right??” We said “yes” and gave her hugs and kisses and told her we loved her and that when we got back we would wake her up from her nap and watch a movie or play with slime. She then said the last words that me and her dad heard ever from her: “I love you Mom, I love you Dad” and we left. We bought the phones went to eat and take a breather. At John’s mom’s house I noticed that Kali hadnt called not once and it was her cousin Devin’s 5th birthday, meaning he could visit Kali finally at the hospital – cause you ad to be at least 5 years old. He was so excited he loved Kali and Kali was excited to be able to see him.

John’s sister and husband and Devin went to kalis room but noticed her door was closed and doctors and nurses were in there. They couldn’t go in, they were told to wait in the family room. John’s sister called us and told us what was going on and what was happening. I immediately called Kali’s nurse and demanded to know what was going on and why they didn’t call me. The nurse told me that after we left Kali was getting tired and wanted to take a nap untill we came back (she had a routine of doing this every time). When the nurse went into kalis room Kali was breathing and looked like she was asleep. The nurse tried to wake her up for meds and couldn’t wake up Kali: she tried everything when nothing worked she called for the doctor to come in immediately. He did and Kali was breathing but they didn’t know what was wrong with her, so they intubated her in case she stopped breathing and rushed he to MRI scan.

I flew down from were we were, 30 mins away, speeding the whole way. When we got there Kali was just getting wheeled down to MRI. I gave her a kiss told her I loved her and then screamed at her oncology team “wtf is going on”. They told me that they didn’t know for sure but they suspected that Kali had a stroke. When the results came back from the MRI the doctors took me in a room and surrounded me and told me that I need to sit down. I said “no what the hell is going on”, Kali was getting better and was going to be moved from PICU to the 7th floor. I was then told news that killed me and my soul forever: Kali suffered a cerebellular hemophagic stroke and a blood clot bursted in her brain, she was bleeding in her brain and needed a 5 hour surgery to stop the bleeding.

Kali went to sleep and never woke up that was November 27. She survived surgery and was making progress but then declined rapidly. She ended up being put on life support and later declared brain dead because the damage from the clot damaged her brain stem. So I made the decision that she had had enough and I was taking her home.

On Dec 6th I fought tooth and nail with her doctors and staff to get her transported out of children’s to her grandma’s apartment to be put on hospice care. I argued and cried and yelled and I finally got my way: Kali was brought home by ambulance. I was her hospice nurse in charge of pushing the buttons of morphine and verset to help her transition. When they took her off life support at the apartment they said that she wouldn’t last a hour. Kali sure showed them: she lasted 2 days on Dec 8th at 8:00 Kali beat cancer.

Kali fought with a smile on her face and nothing but positive thoughts for 11 months she made me the proudest mom ever alive.  I didn’t get to see her take her last breath, she made sure of it. I was upset but I now know why she wanted to spare me that heartache. I held her and rocked her in my arms like a little baby after she passed. I gave her a bed bath put good smelling lotion on her and kissed her and told her I was proud of her. I held her till the coroner came and had to rip her from my arms. After that I lost my mind, I don’t remember much after that I just wanted to know if Kali knew that the time we saw her was the last time.